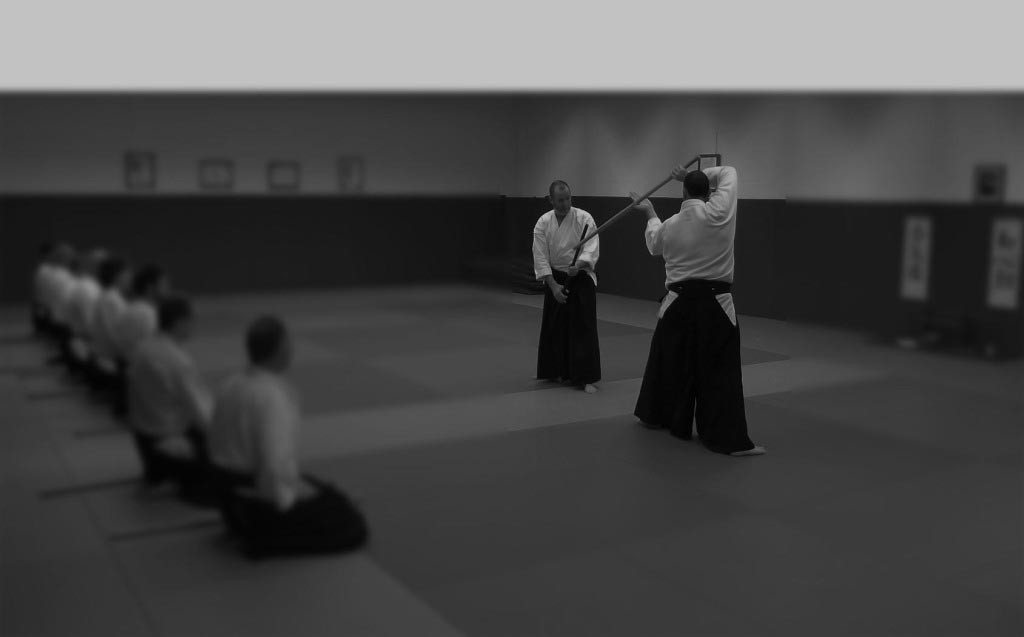 We often hear of Aikido and other martial arts being discussed in terms of a “Spiritual Discipline” or “Way” but what does this mean?

If we explore some of the concepts that are inherent in many of the traditional Japanese arts and the outlook on nature and life that is prevalent in Japan, we can discover in what way Aikido is a spiritual as well as a physical practice.

Japanese aesthetics is a set of ancient ideas that include “WABI” (transient and stark beauty) “SABI” (the beauty of natural aging) and YUGEN (Deep awareness of the universe).

These words describe a mindful and deep view of the natural world even at a most mundane level such as looking at an old withered tree and appreciating it for its form and for what it is.

Another concept, especially in Japanese Buddhism is that all things including ourselves are considered to be in the process of evolving from or dissolving into nothingness.  It must be remembered that “nothingness” is not necessarily empty space; it could be seen as a space of potentiality.

What has this to do with Aikido?  These ideals and others, underpin many of the aesthetic and cultural norms found in Japan.  It is likely that the founder of Aikido, Morihei Ueshiba (O Sensei) would have had such underpinning beliefs and values which in turn have influenced the development of his art.

O Sensei often talked of looking at nature for its flow and movement and how this can be reflected in Aikido.  It takes a quiet mind and a cultivated eye to discern such signatures in nature and if Aikido is trained with the right mind it is our first step in cultivating this ability and so the first step on linking the physical art with the spiritual.

Aikidoka talk of harmony with the universe but what is that?  To me this is the awareness of the ongoing process of nothingness or potential, evolving into form and finally dissolution back to emptiness.

The same process takes place in Aikido, we start ready, no movement, nothingness, striving for Mushin an empty mind.  Within that nothingness lies the potential for great energy and form.  Then there is the execution of the technique and then the dissolving of that technique once completed into nothingness or potential to move into the next technique.

This view of nature including the idea of nothingness (potential) in particular in the Zen form of Buddhism which came to influence the martial arts, has allowed the Japanese to identify seven qualities in nature which are required for achieving the state of  “Wabi Sabi”. These are:

The Japanese believe that these characteristics are found in nature and similar qualities can be found in the human character and appropriateness of behaviour.  Therefore, aesthetic values have an ethical meaning that is found in much of Japanese culture.  These qualities can be instilled in us as individuals through an appreciation of and practice of the arts such as Aikido.

So Aikido as a spiritual path means through the use of physical technique and an attempt to produce perfect form we are developing a mind that can observe and appreciate the natural world around us.

Aikido can through the training of our bodies and mind allow these abstract aesthetic ideas of describing nature to be developed into certain values and behaviours in ourselves and in so doing help make us better individuals.

This is how I see the link between the physical and spiritual in Aikido practice that makes up the “Do” or “The Way” or “The Spirituality” of the art.

“We do not come into this world; we come out of it, as leaves from a tree.” – Alan Watts.